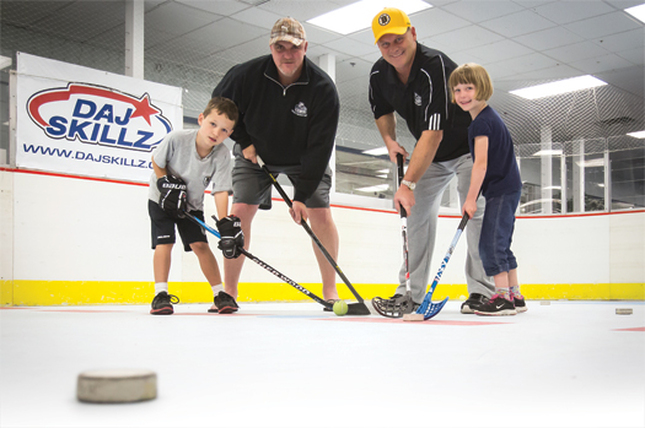 USA Hockey Magazine, September 2013:  Tucked away in the back of the noisy Foxboro (Mass.) Sports Center is a quiet place where children are falling in love with the game of hockey, the same way their fathers and uncles did at a time when New England was producing Olympians and NHLers by the dozens.

Young hockey players are finding enjoyment while honing their shooting, skating and stick-handling skills on platforms that make them feel like they’re in an amusement park.

“It’s the Disney World of hockey,” said David A. Jensen, the co-founder of the DAJ Skillz Center.

The center is based on the principles that are the cornerstone of the American Development Model, and is designed with the flexibility to work with teams, family schedules and budgets, and individual players’ needs.

Not to be confused with fellow 1984 Olympian David H. Jensen, the publisher of USA Hockey Magazine, David A. is a Boston-area native who was a member of the famed “Diaper Line” with Hall of Famers Pat Lafontaine and Eddie Olczyk.

A first-round NHL draft choice in 1984, Jensen played hockey at the highest levels and, like his partner in the Skillz Center Larry Martin, is an experienced sports parent who remembers what it looks like when a kid is having fun and getting better at what he or she loves doing.

“Having grown up in what I think was the ADM era before it was even created, what we were doing on and off the ice was similar to what [USA Hockey] is advocating,” Jensen recalls.

“We were doing a lot of cross-ice hockey when we were really young. The coaches were playing goalie and everyone was having a lot of fun, but we were also working on our skills, skating, stick-handling and shooting.

“That doesn’t exist today. Even if a [coach] has credentials, he’s overmatched by too many kids and not enough time.”

Thanks to the hi-tech gadgetry of SuperGlide synthetic ice under Rapid Shot and Rapid Hands exercises, the DAJ Skillz Center is part arcade, part classroom, part playground (with a miniature rink complete with Swedish Floorball sticks) and part testing ground.

“We start kids on sneakers and it progresses to skates. It’s all reality training,” said Jensen, who spends 30-40 hours weekly on skills training with the South Shore Kings and the three other local hockey programs that call Foxboro home.

A youngster can get lost in the enjoyment and learn valuable lessons during one-on-one training sessions from elite professional athletes like Jensen or former NHL defenseman Glen Featherstone.

“It’s so fun when a kid comes in –– you let him shoot and you just show him one thing and right away there’s improvement. To me, that’s worth it,” said Featherstone, who addresses mechanics with young shooters and talks to them about their goals.

Like Jensen and Martin, Featherstone shares a concern that children spend too much time playing games and not enough time working on their skills. Rarely able to touch the puck, frustrated players without an alternative platform for improvement get discouraged and contribute to the state’s alarming rate of resignations.

“I’ve seen my son play since he was 5 years old, and I know the things that are missing,” said Martin, a former bond trader who moved from his native Brooklyn, N.Y., to New Hampshire, where he coached his son Tyler’s team.

A USA Hockey certified coach, he’s now based in Hanover, Mass., and, together with Jensen, has an eye on expanding the DAJ Skillz Center to other Boston-area rinks.

“I actually had the whole business plan written up, I had the funding,” said Martin, who only needed a lead instructor to get the plan off the ground.

“One of the things we’ve seen is a lot of guys out there who don’t necessarily have the credentials to be teaching the sport. Some of them could be very well qualified but are in it for the wrong reasons. So David and I had a call and it was almost like I was talking to myself. The ideas that were going back and forth were the same exact thing.”

A positive, fun atmosphere where inviting friends and interaction with the experts is encouraged, the DAJ Skillz Center had 40 members within two months. Some hockey programs were soon sending entire teams, from Mites to Bantams, for weekly instruction that features station-based training on shooting, stick-handling and skating [stride extension].

“It’s all age-appropriate; we’re going to train according to the ADM model,” Jensen said.

Aaron Macedo, 15, of Taunton, Mass., has been on skates from age 3 but had never seen the improvement he has already experienced in two months of skills training.

“The coaches from the league, they don’t have time to focus on just one kid,” said his mother, Karen Nadeau.

“[There’s] more one-on-one here, compared to when he’s in the group on the ice ... He loves it, absolutely loves it. He’s always asking when we’re coming here.”

Macedo now visits the center three to four times per week, usually for 60 to 90 minutes at a time.

“It’s made my shot a lot better, just a lot stronger,” he said. “The whole mechanics things, my hand, bending my knees more.”

In the Rapid Shot room, a machine feeds pucks to a shooter, who aims at targets on a regulation-size net 20 feet away. A scoreboard displays and stores scores for power and accuracy so the shooter can measure his progress.

It’s an affordable camp for the average kid, including 7-year-old Walpole, Mass., native Thomas Dunn, whom Jensen dubbed “Top Shelf Tommy” after the swift skater broke a scoring drought with a hat trick.

“He wasn’t keeping his head up, which is very important, so he was missing some good scoring opportunities last season,” said his mother, Cheryl Dunn.

“Working with these guys, NHL guys, who give him a lot of attention, has really helped his confidence. He’s been scoring a lot lately.”