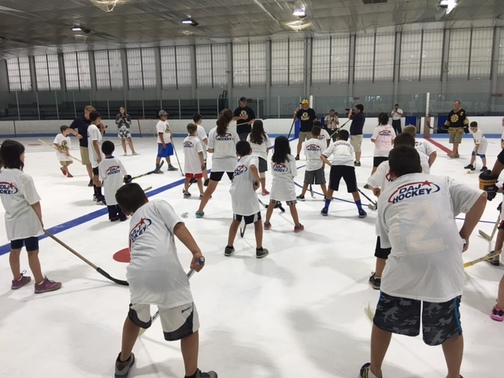 The Massachusetts Department of Conservation and Recreation (DCR) will join with DAJ Hockey, LLC and the Boston Bruins Alumni to conduct a series of street hockey events in six urban areas this summer.

The DCR's "Urban Summer Street Hockey Tour" will begin on July 19 and conclude on August 26. The street hockey events are designed to provide at-risk youth with a high-quality athletic and educational experience delivered by some of hockey's greatest legends. The events are free and open to kids from 6-15 years old.

Each clinic will feature basic skills instruction, structured games/play time and discussions on subjects such as teamwork, nutrition, bullying and more. The clinics will also feature food, beverages and free hockey-related promotional items -- while supplies last.

Added David A. Jensen, owner of DAJ Hockey, 'We created our "Hockey in the Streets" program last year because we are committed to bringing the great game of hockey to everyone --  regardless of the socio-economic background.  It is very gratifying to be able to connect Boston Bruins legends with urban kids, who often don't have access to the great sport of hockey.'

Each clinic will from to 6-8 PM and will be held adjacent to DCR rinks. There is no need to register -- to show up and be ready have fun!.

​Here is the complete schedule:


​There is no need to pre-register.

​Founded by US Olympian and NHL veteran David A. Jensen in 2012,  DAJ Hockey is New England's premier hockey skills training company. DAJ features on-ice hockey skills programs via Boston Bruins Alumni Camps and off-ice skills training at the high-tech DAJ Skills Centers in Foxboro and Attleboro, MA. DAJ's "Hockey in the Streets" program brings the joy of hockey to urban areas, which may not otherwise get exposure to the sport.