There need to be reasons to love the game. And if all they’re doing is playing hockey 365 days a year, there’s a good chance the game they’re supposed to love becomes more of a chore than a passion.

That amount of exposure too early on can put undue stress and pressure on them and give the kids plenty of reasons not to love hockey.

PLAY
Playing the game is where kids learn that the game is, in its simplest form, fun. And if you can mix in age-appropriate training and practice with skills and athleticism introduction, kids will have even more fun.

LOVE
Once a kid learns to play the game and begins to develop skills and athleticism, hockey starts to take priority among other activities. Skills become more refined, their physical and mental makeup is stronger and the friendships they developed early on continue to grow.

The games become more important and hockey in general becomes a bigger part of their life.

EXCEL
Now that they play and love the game, a higher premium is placed on excelling at it. Tougher competition and more of a focus on mastering skills play an increased role in their development. Hockey starts to take a larger priority over other activities.

But, above all, the game is still fun and the friendships that were forged back in Mites are as strong as ever. 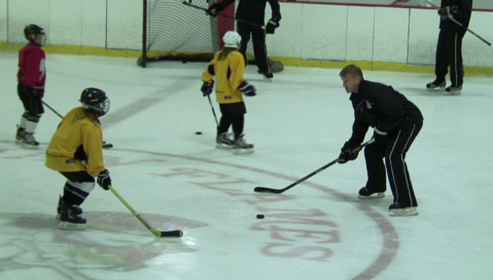